What’s Next for Cryptocurrency?

Bitcoin was the first cryptocurrency to make a splash in the financial world and the minds of the general public, but it won’t be the last. As cryptocurrency continues to evolve, you don’t have to be in the dark when the next big thing hits.

Cryptocurrencies are a form of digital currency that are designed to be fully public (accessible by anyone on the internet without restrictions) and decentralized (saved on several different computers across the internet).

This can happen because of “blockchains.” A blockchain is a huge digital record that tracks transactions. The “block” is the current chunk of transactions being processed. Blocks are added to the “chain,” which is the long list of blocks going back to the first transaction.

Every transaction on the blockchain can be seen by anyone, but they don’t contain identifying information. A cryptocurrency blockchain is saved on thousands of computers, called “nodes,” spread across the world. These nodes continuously verify, add to, and record the blockchain for that cryptocurrency.

Though nothing is certain and the economy may shift away from crypto, the trends to look out for in crypto are the Ethereum Blockchain, NFTs, decentralized applications, and stablecoins. We’ll look at each of these topics to help paint and overall picture of where crypto is heading.

But it has some key differences:

What does Ethereum mean to me right now?
Ethereum was designed to be the next evolution of cryptocurrency. It took the successful aspects of Bitcoin and added more functionality. While Bitcoin is used to only trade virtual currency in a decentralized and public way, Ethereum uses decentralized tokens and applications in addition to currency. This added functionality allows Ethereum to have uses beyond trading speculative currency. But most of this world is still decided by speculative investors and not its utility.

A popular feature of cryptocurrency are NFTs. NFTs, or non-fungible tokens, are unique lines of code that can be traded on a cryptocurrency blockchain (Here is a more in depth look at NFTs).

NFTs often represent digital artwork and are traded online in communities similar to trading baseball cards or other collectibles.

The technology behind NFTs could eventually be used to store medical, government, or other personal records to provide a safe place for those records to be accessed, but there are currently major concerns over privacy and reliability. While blockchains could solve a lot of problems with how personal data is handled and distributed in theory, there has yet to be a widespread solution implemented for general use by any large government or organization.

What do NFTs mean to me right now?
NFTs have a lot of buzz around them, but like cryptocurrency in general, they haven't evolved beyond being a fad into something more stable. There is a possibility that they could become a common way we trade digital items or handle records in the future, but that is still many years down the road if at all.

Decentralized applications or DApps are another key feature of Ethereum and several other cryptocurrencies. These are complex applications that run using the blockchain.

The most common types of DApps are those that mimic the banking system. These DApps value transparency and allow for bank-like functionality without centralized banks.

What do Decentralized Applications mean to me right now?
DApps provide a service that can pay for running the blockchain. This could technically allow blockchains like Etherium to gain value based on the services it provides in addition to the value of its currency. DApps could eventually be the main way that cryptocurrency are valued. That said, DApps have struggled to gain traction, and they still remain an investment with high volatility.

Taking a Stake in Stablecoins 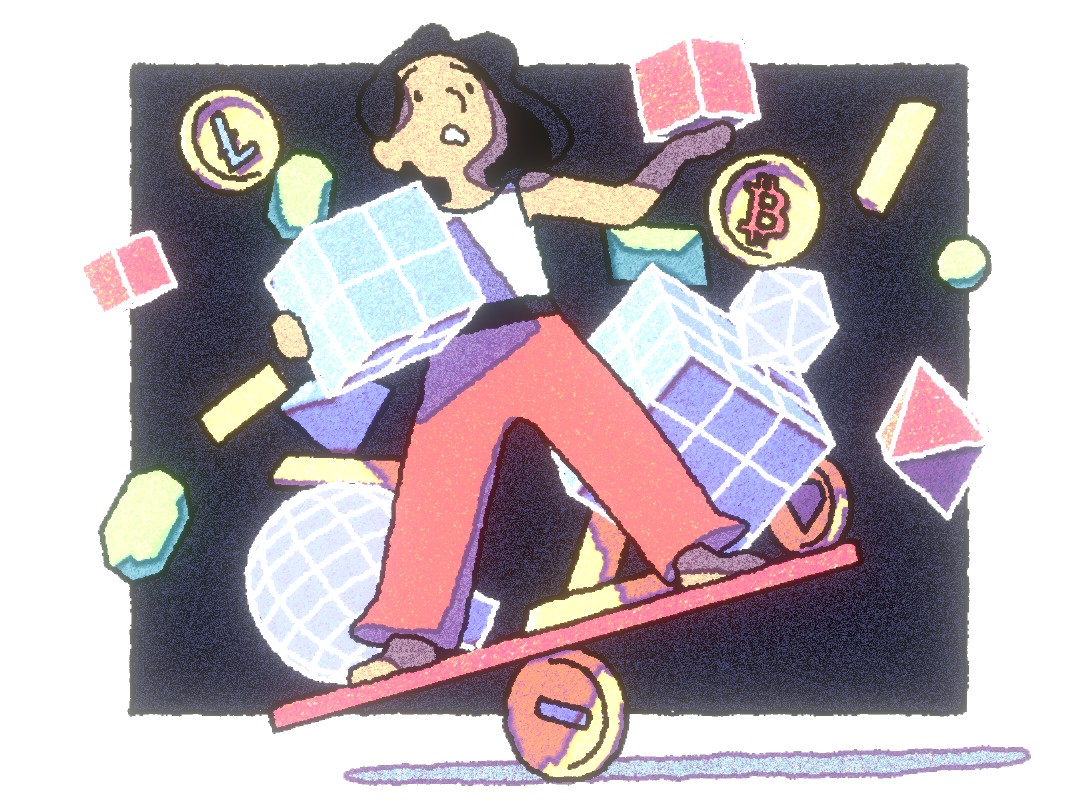 Kyle Smart
Other things that can back stablecoins are precious metals, commodities, and even other cryptocurrencies.

The price of stablecoins is controlled by whatever is used to back them. If they are backed by a stable currency it is easy to make trades on the blockchain without prices fluctuating wildly over a long period of time, but it also means that investments in stablecoins could suffer from inflation over time rather than grow in value.

What do Stablecoins mean to me right now?
Stablecoins can remove one of the most difficult problems with using cryptocurrency, the widely fluctuating prices, but come with their own drawbacks. Even if a stablecoin is currently backed by a stable commodity, there is no guarantee it will continue to be backed in the future, and there are not currently a lot of benefits of trading with stablecoins that you wouldn’t get from just using the currency that backs the coins.

What does it all mean to me right now?

The most important thing to understand when looking at crypto and its various alternatives and technology is that, for most people and in most circumstances, it should be treated like a regular form of investment, not a miracle cure to easily make you vast amounts of money.

While crypto may feel like the hot topic right now, it’s possible that it may prove to be a fad. As with any investment, it can be very dangerous to jump on fads without proper understanding, so think carefully and do your research if you’d like to get involved.

Disclaimer
While we hope you find this content useful, it is only intended to serve as a starting point. Your next step is to speak with a qualified, licensed professional who can provide advice tailored to your individual circumstances. Nothing in this article, nor in any associated resources, should be construed as financial or legal advice. Furthermore, while we have made good faith efforts to ensure that the information presented was correct as of the date the content was prepared, we are unable to guarantee that it remains accurate today.

Neither Banzai nor its sponsoring partners make any warranties or representations as to the accuracy, applicability, completeness, or suitability for any particular purpose of the information contained herein. Banzai and its sponsoring partners expressly disclaim any liability arising from the use or misuse of these materials and, by visiting this site, you agree to release Banzai and its sponsoring partners from any such liability. Do not rely upon the information provided in this content when making decisions regarding financial or legal matters without first consulting with a qualified, licensed professional.
Related Content
Link to resource.
article

Budgeting
2 min read
The Upside of Frugality
Frugal living not only saves you money, it pays huge dividends. Is a penny saved really a penny earned? Or is there more to it?
Link to resource.
article

Budgeting
7 min read
What Are NFTs?
NFTs can be confusing, learn everything you need to know about them here.
Link to resource.
article

Budgeting
9 min read
A Practical Guide to Bitcoin
Bitcoin and cryptocurrency, without the math and the hype.
Banzai interactive courses are fun and free. Go ahead.
Already have an account? Log In.
Sign Up