What is a Bull or Bear Market?

Financial news throws around a lot of confusing terms. Unless you know bear from bull, red from black, and The Dow from The NASDAQ, it can be hard to understand exactly what is being said. But it only takes a few minutes to brush up on the most common financial terms.

Bull and Bear are the two most popular and oldest ways to describe the general trend of the stock market over a period of time. They can refer to the overall stock market or a specific part (usually called sectors) like tech or oil.

While it’s unknown why bear and bull were specifically chosen, these terms have been used to describe stock markets since the 18th Century. 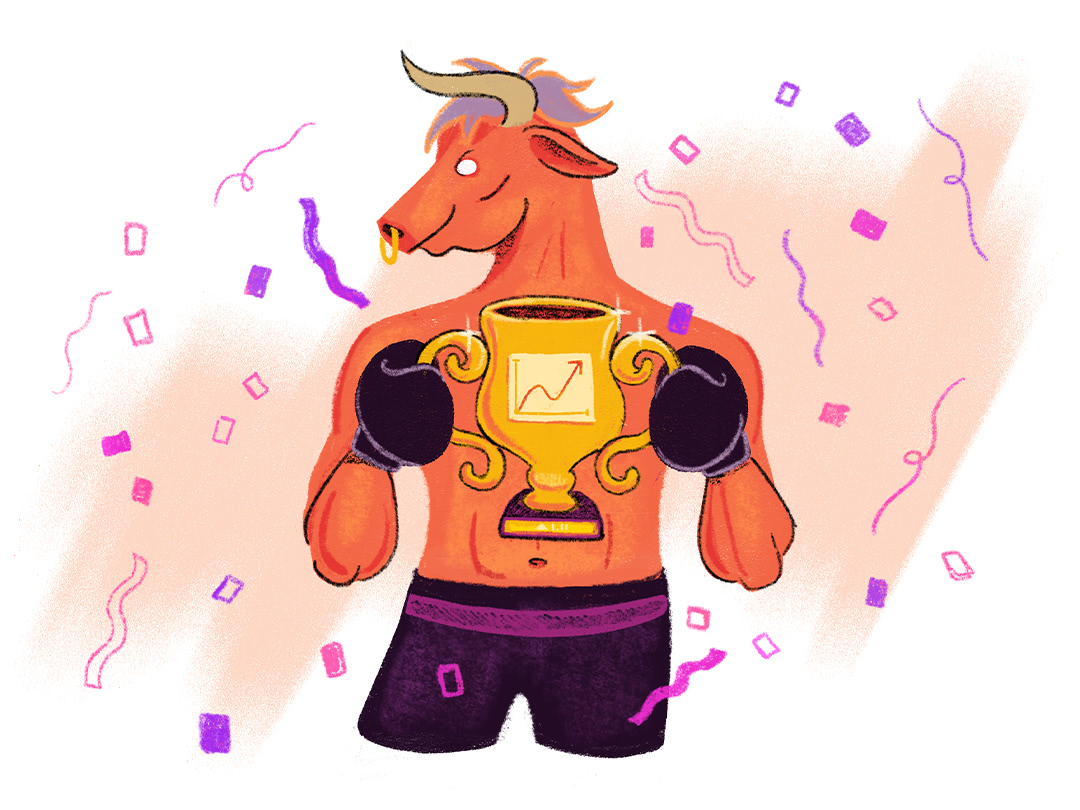 Red and Black is another term you might have heard to describe how a company is doing. If a company is in the black, it means it has more money than it has debt. A company in the red is the opposite, they have more debt than they have money. The terms red and black refer to the ink often used when finances are kept in ledgers. Black ink is traditionally used to represent owned assets and red ink is used to represent owed debt.

Because one is seen as good (black) and the other bad (red) it’s easy to think of them as being equivalent to bull and bear, but red and black refers to the finances of an individual company, not the market as a whole.

Other confusing terms found in financial news are the names for the market indexes. Indexes are a collection of companies grouped together and tracked to make generalizations about the stock market as a whole. If a popular index is doing poorly, it could be a sign of the economy doing poorly overall. These indexes often use the largest and best performing companies to evaluate the stock market.

The most popular indexes are:

The S&P 500 (Standards and Poor 500): The S&P 500 takes the 500 highest performing stocks to create its index. The larger the stock, the more influence or weight it has. This is one of the most carefully watched indexes to understand and predict the overall market health.

The Dow (Dow Jones Industrial Average): This is an index of 30 prominent companies selected by a committee that has three representatives from the S&P and two from The Wall Street Journal. Because it only examines 30 companies, it tends to be less reliable to measure the overall performance of the market, but can be better at predicting how individual portfolios are doing if they line up with the 30 companies The Dow specifically examines.

The NASDAQ (National Association of Securities Dealers Automated Quotations): The NASDAQ consists of over 3,300 different companies and is heavily weighted toward information technology and has seen rapid growth over the past 40 years becoming a major representative of market growth.

Understanding the terms above puts you well on your way to absorbing stock market news with ease.

Disclaimer
While we hope you find this content useful, it is only intended to serve as a starting point. Your next step is to speak with a qualified, licensed professional who can provide advice tailored to your individual circumstances. Nothing in this article, nor in any associated resources, should be construed as financial or legal advice. Furthermore, while we have made good faith efforts to ensure that the information presented was correct as of the date the content was prepared, we are unable to guarantee that it remains accurate today.

Neither Banzai nor its sponsoring partners make any warranties or representations as to the accuracy, applicability, completeness, or suitability for any particular purpose of the information contained herein. Banzai and its sponsoring partners expressly disclaim any liability arising from the use or misuse of these materials and, by visiting this site, you agree to release Banzai and its sponsoring partners from any such liability. Do not rely upon the information provided in this content when making decisions regarding financial or legal matters without first consulting with a qualified, licensed professional.
Related Content
Link to resource.
article

Saving
4 min read
Stock Market Basics
Learn how to buy & sell stocks so you can start investing your money.
Link to resource.
article

Investing
3 min read
Avoiding Inappropriate Investments
There's outright fraud and there are inappropriate investments. Stay away from both.
Link to resource.
article

Retirement
4 min read
Portfolio Building
Variety isn’t just the spice of an investor’s life. It’s an essential ingredient.
Banzai interactive courses are fun and free. Go ahead.
Already have an account? Log In.
Sign Up